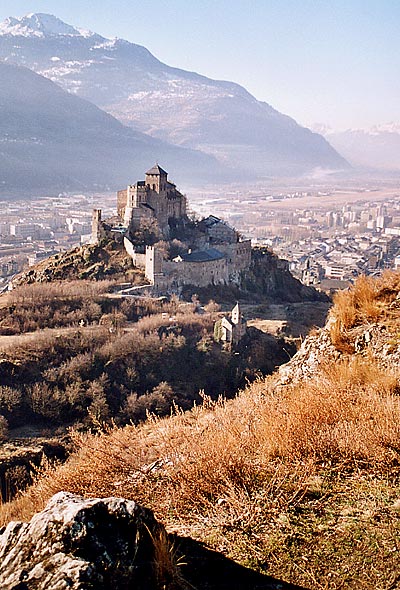 The canton of Valais (UK: /ˈvæleɪ/ VAL-ay, US: /væˈleɪ/ val-AY, French: [valɛ] (listen); German: (Kanton) Wallis [ˈvalɪs] (listen); Italian: (Canton) Vallese [vaˈlːeːze, -eːse]) is one of the 26 cantons of Switzerland, situated in the southwestern part of the country, around the valley of the Rhône from its headwaters to Lake Geneva, separating the Pennine Alps from the Bernese Alps. The canton is simultaneously one of the driest regions of Switzerland in its central Rhône valley and among the wettest, having large amounts of snow and rain up on the highest peaks found in Switzerland. The canton of Valais is widely known for the Matterhorn and resort towns such as Crans-Montana, Saas Fee, Verbier and Zermatt. It is composed of 13 districts (hence the 13 stars on the flag) and its capital is Sion.