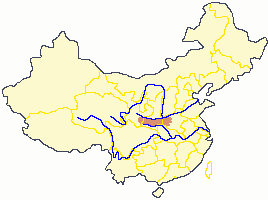 The Qinling (Chinese: 秦岭) or Qin Mountains, formerly known as the Nanshan ("Southern Mountains") and sometimes called the "Szechuan Alps", are a major east-west mountain range in southern Shaanxi Province, China. The mountains mark the divide between the drainage basins of the Yangtze and Yellow River systems, providing a natural boundary between North and South China and support a huge variety of plant and wildlife, some of which is found nowhere else on earth.