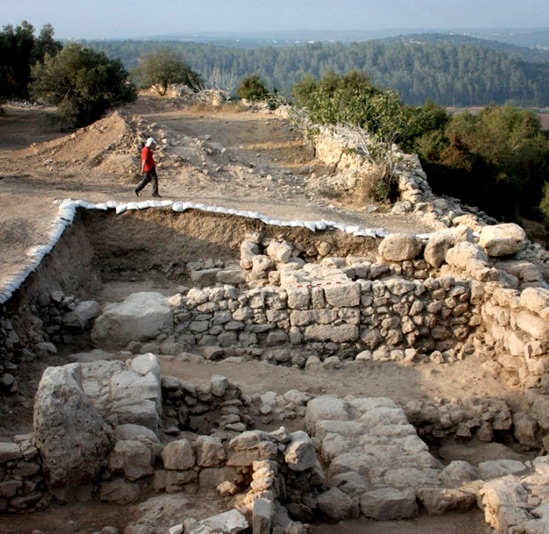 Khirbet Qeiyafa (Hebrew: חורבת קייאפה‎; Arabic: خربة قيافة‎), also known as Elah Fortress and in Hebrew as Hirbet Kaifeh, is the site of an ancient fortress city overlooking the Elah Valley and dated to the first half of the 10th century BCE. The ruins of the fortress were uncovered in 2007, near the Israeli city of Beit Shemesh, 30 km (20 mi) from Jerusalem. It covers nearly 2.5 ha (6 acres) and is encircled by a 700-meter-long (2,300 ft) city wall constructed of stones weighing up to eight tons each.[citation needed] Excavations at site continued in subsequent years. A number of archaeologists, mainly the two excavators, Yosef Garfinkel and Saar Ganor, have claimed that it might be one of two biblical cities, either Sha'arayim, whose name they interpret as "Two Gates", because of the two gates discovered on the site, or Neta'im; and that the large structure at the center is an administrative building dating to the reign of King David, where he might have lodged at some point. This is based on their conclusions that the site dates to the early Iron IIA, ca. 1025–975 BCE, a range which includes the biblical date for the biblical Kingdom of David. Others suggest it might represent either a North Israelite, Philistine, or Canaanite fortress, a claim rejected by the archaeological team that excavated the site. The team's conclusion that Khirbet Qeiyafa was a fortress of King David has been criticised by some scholars, but has been validated by the Israel Antiquities Authority (IAA).