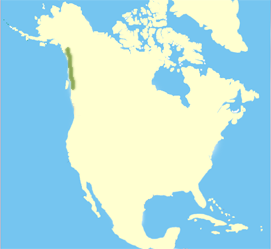 The Coast Mountains (French: La chaîne Côtière) are a major mountain range in the Pacific Coast Ranges of western North America, extending from southwestern Yukon through the Alaska Panhandle and virtually all of the Coast of British Columbia south to the Fraser River. The mountain range's name derives from its proximity to the sea coast, and it is often referred to as the Coast Range. The range includes volcanic and non-volcanic mountains and the extensive ice fields of the Pacific and Boundary Ranges, and the northern end of the volcanic system known as the Cascade Volcanoes. The Coast Mountains are part of a larger mountain system called the Pacific Coast Ranges or the Pacific Mountain System, which includes the Cascade Range, the Insular Mountains, the Olympic Mountains, the Oregon Coast Range, the California Coast Ranges, the Saint Elias Mountains and the Chugach Mountains. The Coast Mountains are also part of the American Cordillera—a Spanish term for an extensive chain of mountain ranges—that consists of an almost continuous sequence of mountain ranges that form the western backbone of North America, Central America, South America and Antarctica.