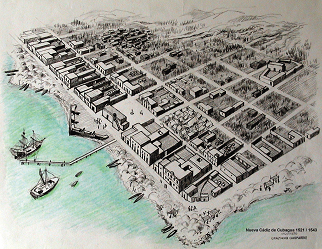 Nueva Cádiz is an archaeological site and former port town on Cubagua, off the coast of Venezuela. First established in 1500 as a seasonal settlement, by 1515 it had become a year-round permanent town. it was one of the first European settlements in the Americas. The settlement was given the name Nueva Cádiz when it was incorporated as a city in 1528.