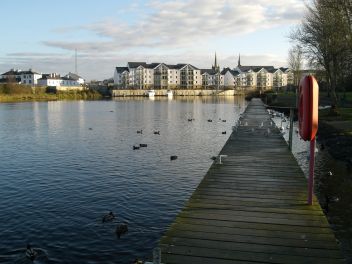 Enniskillen (/ˌɛnɪsˈkɪlən/ EN-iss-KIL-ən, from Irish: Inis Ceithleann [ˈɪnʲɪʃ ˈcɛlʲən̪ˠ], 'Ceithlenn's island') is the largest town in County Fermanagh, Northern Ireland. It is in the middle of the county, between the Upper and Lower sections of Lough Erne. It had a population of 13,823 at the 2011 Census. Enniskillen Castle was built in the 15th century as a stronghold of the Maguires, before coming under English control in the early 17th century. The castle and town were expanded during the Plantation of Ulster. It was the seat of local government for the former Fermanagh District Council, and is the county town of Fermanagh.